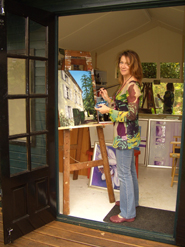 Having studied fine art in Durban and Cape Town, South Africa, I then went on to carve a successful career in advertising design. 1994 saw me settling in London and continuing my career in advertising. In 2002, I abandoned London and a role as Creative Services Director and moved to Cambridgeshire for a quieter life and to embrace my role as a mum. Unable to control the need to create, I established “Murals and More” in 2003. I have completed many projects for private clients and also for schools and small businesses which include spectacular mural art for children as well as interior design projects for clients locally and as wide spread as London, Cambridge, Manchester and Sheffield.

I have played an active role in promoting the visual arts in my small city. Consultant Artist to Vivacity. A member of Ovenden Contemporary, Anglian Potters, and an active committee member of Peterborough Artists’ Open Studios for 9 years, I have participated as an exhibitor and host in this annual event since 2004. Other exhibitions include Elements (2005), The Museum and Gallery, Peterborough (2007, 2008) Peterborough Cathedral (2007) The Bake House Gallery (2008),and the pop up View 5 Gallery (co-founder) at The Old Still (2009, 2010) and also at the Yarrow Gallery in Oundle in Jan and in May 2010. The Museum and Art Gallery, Peterborough, again (April 2010, Oct 2012). The Cavell Centre Gallery as well as Allsorts Handmade (Co-founder) 2006, 2007, 2008 and 2009, Andronicas Art Gallery and Cafe (Facilitator and exhibitor) 2010, 2011 and 2012. Atelier East Summer Exhibition 2011 (Winner of ‘Best in Show’). Art in the Park, Sheffield Sept 2011/2012 (Gold Award for Best Exhibition in show) The Still Working pop up gallery at the Old Still (Sept 2011), Harriet’s Art Gallery (Oct – Jan 2011) V&A Inspired by…. 6 Oct – 21 April 2012 (Winner in the Ceramics category)
Art in the Heart Oct 2012 – 2017. Art in Lyddington 2012 where one of my paintings was highly commended. My work is held in private collections in London, Sheffield, Stamford, Peterborough, Manchester, Leeds, in South Africa and in France.